Optimator® produces an optimised shielding gas flow from the very first second. Any traditional regulator will not control the initial flow surge, which is unnecessarily high, and a very expensive waste. 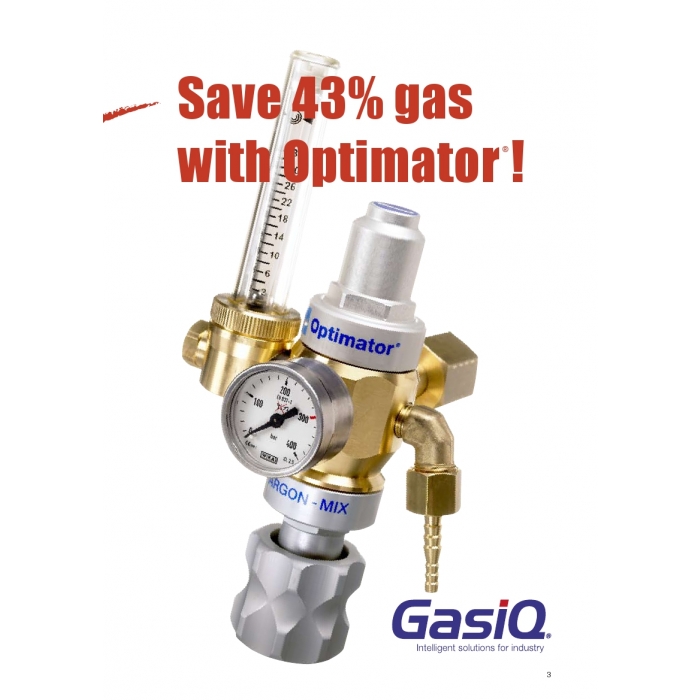 Skip to the beginning of the images gallery

Save 40% off you MIG/TIG Welding Gas Bills using Optimator

Most companies working with MIG/MAG and TIG welding know very well the price of welding wire per kilogram. But, relatively few are aware that the cost of the shielding gas is at least as high, per meter of weld Optimator® is designed for one sole purpose, to reduce your consumption of expensive gas, generally by 30%. Just a few months using your Optimator® and you will get your money back - the rest is pure profit.

Optimator® produces an optimised shielding gas flow from the very first second. Any traditional regulator will not control the initial flow surge, which is unnecessarily high, and a very expensive waste. In worst cases this excessive surge represents up to 50% of your total shielding gas consumption! The higher the frequency of starts, the more gas is wasted and more money could be earned when you change to the Optimator®.

Optimator® provides optimal start flow that is approx. 1/4 of the initial flow of a conventional regulator. This saves you shielding gas. The smooth initial flow, in addition, enables higher quality of welds since you minimize the turbulence that often influences your welding process.

Optimator® is a high performance multi-stage regulator with built-in economizer and flow meter. It is mostly used for advanced gas shielded welding applications, where it will reduce the total welding cost by decreasing the gas consumption by up to 50%. In addition, reduced porosity sensitivity improves weld quality.

The Optimator two stage function will give stable gas flow stable even when the cylinder pressure drops.

There are proven results too,  Volvo in Sweden saved at least 43% in gas through the installation of Optimators.

This is taken from a copy of a GASIQ (Elga) case study with Volvo.

To check how much gas could be saved by using Optimator, the following test was performed at Volvo Bus in Uddevalla, Sweden: At one of the company's welding stations, a repetitive welding cycle is performed that takes about 60 minutes. The test consisted of allowing the welder to perform one cycle using the existing equipment and the following cycle using the Optimator. A mass flow meter with a digital counter was connected to measure the gas consumption during the two welding processes. A Check was also performed at the welding gun with a flow meter to see that the gas flow was the same for both runs. The gas flow was recorded as 18 l/minute.

The test showed that Optimator consumed 49% less gas. To be absolutely on the safe side, an error margin of 10% was added to the value read off the flow meter. It can therefore be established that Optimator saved at least 43% of the gas in this welding cycle at Volvo

Optimator® is also as lockable version . This is an advantage when you need to meet the highest welding quality demands, for instance ISO 9000 certification, please call 01952 290800 for further information.

Write Your Own Review